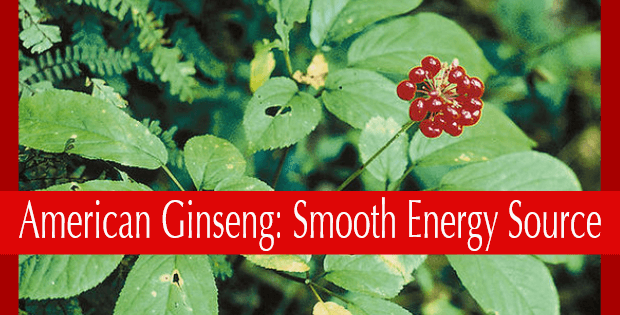 American ginseng provides energy, adaptability, heightened alertness and increased endurance.  In years past, it sparked a boom in Minnesota comparable to the California Gold Rush.

American ginseng is an adaptogenic herb and an energy tonic. Believed to improve stamina, relieve stress, stimulate the immune system, enhance mental clarity, and restore well-being, it is now being studied by medical researchers for the treatment of cancer, diabetes, and Parkinson’s disease.

American ginseng differs in its actions from the Asian varieties of ginseng. It is useful for people who are warm and have more energy, are more aggressive in nature or who have high blood pressure.  It will balance the body and mind without being overly warming or overly stimulating. It provides a steady, non-stimulant increase in energy that builds over time.

American ginseng has a cooling and moistening effect and can help dry coughs due to air pollution or smoking. It is a particularly helpful adaptogen for those who live in warmer climates. American ginseng is highly regarded for its ability to promote the secretion of bodily fluids and is considered especially strengthening to new mothers.

American ginseng is a perennial herb in the Panax genus. The word ginseng is from the Chinese language and means roots that resemble the legs of a man.  American ginseng is Panax quinquefolium and has been used medicinally by the Chinese for about 2000 years. Native Americans used this herb to treat headache, fever, infertility and indigestion.

American Ginseng contains active components such as ginsenosides  and polysaccharide glycans including quinquefolans A, B and C. Research has shown that ginsenosides give all types of ginseng their famous medicinal qualities.

American Ginseng has more of the soothing and calming ginsenosides than Asian Ginseng. American and Asian ginseng can be blended to create a more balanced therapeutic effect.   The older the root, the greater the number of types of ginsenosides that are found in it. This is why older ginseng roots are always considered to be more valuable. 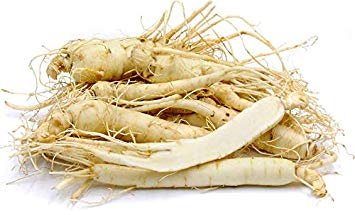 Calms and Balances Body and Mind

Wild American ginseng grows in many places in North America from as far south as Missouri to the Hudson Bay. The best wild American ginseng grows in upstate New York in the Catskill Mountains and on up into Canada. While ginseng from Wisconsin is considered to be excellent, that from Pennsylvania, Kentucky and further south is considered to be less potent.

To be sure you are getting a professional quality American ginseng root product that contains a minimum of 10% Ginsenosides per dose, try Vital Nutrients – American Ginseng Extract 250 mg. – 100 Capsules.  (As an Amazon Associate I earn a small amount from qualifying purchases.)

Ginseng has made and broken the fortunes of many and has inspired a subculture in rural America unrivaled by any herb in the plant kingdom. To learn more about the fascinating history of ginseng and the current scientific discoveries that are revealing its true healing powers, see Ginseng: The Divine Root, by David A. Taylor