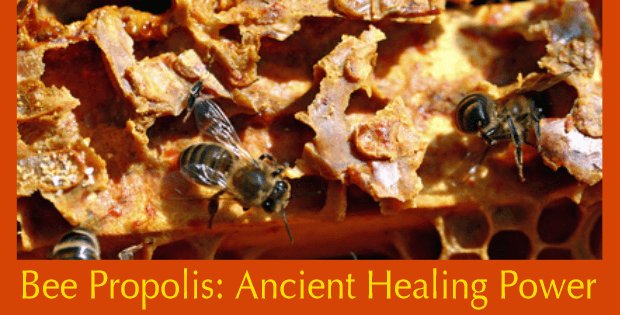 Deep Healing For Infections and Cancer

Modern antibiotic drugs are increasingly ineffective against many microbes.  The Centers for Disease Control has stated, “nearly all significant bacterial infections in the world are becoming resistant to the most commonly prescribed antibiotic treatments.”  For thousands of years, folk medicine practitioners have used bee propolis to treat abscesses, heal wounds and fight infections. Propolis was an official drug in the London pharmacopoeias of the 17th century.

Bee Propolis is a resinous substance gathered from the leaf buds of pine trees,  other cone-producing evergreen trees, and certain vegetables.  Once the resin is transformed by the bees, it disinfects the beehive, seals cracks, and is used to build the hive.  It is a micro-biocidal agent that controls bacterial and viral growth.  Researchers found that bees living in hives coated with propolis have lower bacteria in their bodies and also ‘quieter’ immune systems.

It is a great cold and flu remedy and is especially helpful for sore throats and sneezing.  Propolis tincture taken three times per day is an effective dose.  Research in which propolis was given to rats for two weeks, found that it significantly inhibited histamine release from the rat’s mast cells. Histamine release can make you sneeze, and have watery eyes and a runny nose.  The researchers noted that their results clearly demonstrated that propolis can be effective in the relief of symptoms of allergic rhinitis through the inhibition of histamine release.

Proven Effective For Many Illnesses

Propolis contains as many as 300 active ingredients and is the richest source of caffeic acid and apigenin, two very important compounds that aid in immune response and even fight cancer.  Caffeic acid phenethyl ester, another very powerful compound found in propolis, has been shown to be very effective at suppressing the inflammatory compounds that cause bone diseases and researchers even suggested propolis might be a potential treatment for bone wasting diseases like osteoporosis.  Bee propolis has been shown to reduce dental plaque by inhibiting the activity of enzymes that synthesize glucans from sucrose.

Propolis tincture has many therapeutic properties including stimulating the immune system, anti-microbial action, analgesic, anesthetic and anti-inflammatory activity, along with its very powerful antioxidant effects.  Current studies show that no other product or food analyzed has a higher antioxidant value than propolis.    Propolis is one of the most broad-spectrum antimicrobial compounds in the world.

A search of PubMed shows over 2,000 studies on bee propolis.  Dr. Seema Patel of San Diego State University, did a comprehensive review of the laboratory and animal studies regarding cancer and propolis.  The research literature currently supports the efficacy of propolis against many cancers including brain, pancreas, cancers of the head and neck, kidney and bladder, skin, prostate, breast, colon, liver, and blood cancers.

Propolis fights cancer through many different mechanisms of action including the ability to prevent the growth of new blood vessels to feed cancer cells (anti-angiogenesis), preventing the spread or metastasis of cancer throughout the body, stopping cancer cell division and inducing apoptosis (programmed cell death) in the cancer cells.  It also helps the chemotherapy side effects of conventional cancer treatments.

Better Than Drugs For Herpes

A study published in Phytomedicine, found that propolis is more effective than drug therapy for treating genital herpes.  The study included 90 men and women with genital herpes.  They applied either an ointment containing propolis flavonoids, a drug used to treat herpes sores called acyclovir, or a placebo ointment.  The patients applied one of these ointments four times a day for ten days.  By the study’s end, 24 out of the 30 patients in the propolis group had healed.  Only 14 of 30 in the drug group, and 12 of 30 in the placebo group were cured. That is nearly double the effectiveness of the drug.

Genital herpes is caused by herpes simplex virus type 2 (HSV-2).  The study showed that both a water based propolis extract and an alcohol based extract exhibited high levels of antiviral activity against HSV-2 in tests.  They also found that viral infectivity was reduced by greater than 99% and anti-herpetic activity could be demonstrated for both extracts. The more concentrated the dose and the longer it was applied, the greater the anti-viral activity.

The International Journal of Dermatology in November of 2009, published a study that found that propolis shows strong anti-viral activity against warts.  In a single-blind, randomized, 3-month trial, 135 patients with different types of warts received oral propolis, echinacea, or a placebo.  In patients with plane and common warts treated with propolis, cure was achieved in 75% and 73% of patients, respectively. These results were significantly better than those associated with Echinacea treatment or placebo.

For a super effective propolis tincture, consider trying Propolis Tincture – 70% Ultra Super Strength YS Eco Bee Farms 1 oz Liquid.  It is very thick and concentrated so it can stain, but if used on gauze or mixed with honey or drinks when taking internally, this problem can be solved.  Using a honey and propolis paste is another way to use it.  Propolis Extract – Natural Liquid Honey Paste – 11.4 oz. – Paste might be a little easier to use since it is pre-mixed with the honey.  This paste is excellent for skin conditions but can also be eaten.  Taking propolis in capsules is the most convenient method, Propolis-Raw Unprocessed 1000mg Y.S. Organic Bee Farms 90 Caps, is excellent for internal use. (As an Amazon Associate I earn a small amount from qualifying purchases.)

If you are allergic to bees, you could be sensitive to bee products including honey, pollen and propolis, use with caution in these instances. 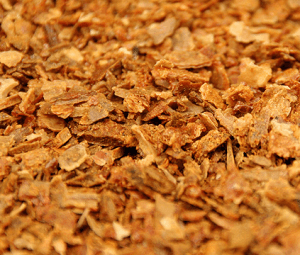 See many more health benefits below!

8. Propolis Helps Treat Asthma  Propolis has a good reputation for having beneficial effects in asthma patients. But the mechanism was not clearly understood so scientists looked at the effect of a compound called CAPE (caffeic acid phenethyl ester). CAPE is the most extensively studied component in propolis and has shown tremendous results in many other studies for conditions ranging from inflammation to athletic performance. The scientists concluded that propolis (more specifically the CAPE in propolis) inhibited the inflammatory and immune response that asthmatics often experience. They went on to say that “this study provided a new insight into the mechanism of CAPE in immune response and the rationale for propolis in the treatment of asthma and other allergic disorders.” I just recently began using propolis with a long term allergy and asthma sufferer. Results have been very promising so far. Their occurrence of chest colds has decreased to zero so far. I’m having him continue with the propolis through the summer so it will be interesting to see how his allergies improve.

7. Propolis Extract Has Radioprotective Effect The aim of this study was to assess whether one of the many bee propolis health benefits is a radio protective effect in mice exposed to a single radiation dose. The mice were treated with quercetin or propolis each day for three consecutive days either before or after being exposed to gamma-irradiation. The scientists found that the mice that received the propolis before being exposed were less sensitive to irradiation than those given the propolis or quercetin after being exposed. So it is a good idea to take your bee propolis each morning before you begin using your cell phone or microwave. We are all exposed to radiation on a daily basis now due to the countless cell phone and satellite signals that surround us. I take propolis on a daily basis in order to help protect me from this excess radiation. I also take an extra dose leading up to any flying I may be doing as radiation levels are quite high in commercial planes.

6. Propolis Extracts Have Anticancer Activity In the August 2009 issue of the Oncology Report, a group of scientist’s looked into the growth inhibitory activity of ethanol extracts of Propolis in human colon cancer cell lines. More than 300 bio-active compounds have been identified from bee propolis in various regions of the world. The objective of this study was to examine whether the ethanol extracts of Chinese and Brazilian propolis may exert anticancer activities in four human colon cancer cell lines. In three of the four cell lines, the extracts of both Chinese and Brazilian propolis caused a marked dose-dependent growth inhibition on the cancer cells. In the fourth cell line, Chinese propolis extract induced apoptosis (complete cell death) in the cells after 72 h of treatment. (this is amazing!) The report concluded that their findings indicate that the ethanol extracts of propolis contain components that may have anticancer activity. Ultimately, one of the many bee propolis health benefits may be as a colon cancer preventative and treatment. But propolis’ effect don’t appear to be limited to just colon cancer – studies are showing that it has positive activity against other cancers as well.

5. Propolis Inhibits Pancreatic Cancer Cells There weren’t a lot of details included with this study, but as reported in the Journal of Natural Products on July 2, 2009, a group of scientists found that propolis was able to inhibit human pancreatic cancer cells under nutrient-deprived conditions. The scientists found that one particular compound in propolis exhibited the most potent cytotoxicity in a concentration and time-dependent manner. (what that means is that the more of the compound they used and the longer they exposed it to the cancer cells, the better the results they obtained) It was also found that another compound in propolis induced apoptosis-like (programmed cell death) changes of pancreatic cancer cells within 24 h of treatment. Essentially, the bee propolis caused the cancer cells to ‘self destruct.’ Of the dozens of bee propolis health benefits, this particular capability just may be the most exciting of all as pancreatic cancer has very low rates of survivorship. It is very difficult to treat and standard chemotherapy treatments are not effective in most cases.

Thanks to Angela Ysseldyk, RNCP at BeePollenBuzz.com for this great info!  Read on for more…