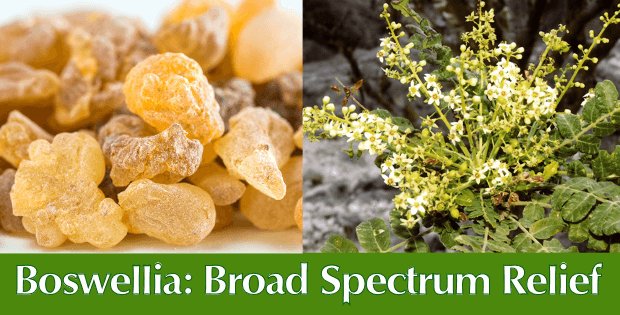 Six out of the ten leading causes of death in the United States involve chronic, low-level inflammation.  Yet no truly safe medical solution to chronic inflammation exists.  Nonsteroidal anti-inflammatory drugs (NSAIDs) such as ibuprofen are powerful inflammation fighters, but they have serious side effects with long-term use.

Recent research has shown that Boswellia’s anti-inflammatory actions may exceed those of the NSAIDs.  They have a broader spectrum of actions and influence a much wider range of inflammation-producing processes with none of the dangerous side effects seen with long-terms NSAID use.  Boswellia extracts have been used for thousands of years to treat a wide range of conditions caused by inflammation.

The specific compound that scientists have identified as having potent pain reducing benefits is AKBA (3-O-acetyl-11-keto-beta-boswellic acid).  The collective compounds found in Boswellia extracts are being extensively studied and are demonstrating effective pain management without side effects.  Boswellia resin is rich in a wide variety of biologically active compounds including terpenes and boswellic acids, which are powerful inhibitors of pro-inflammatory signaling molecules.  Virtually all compounds isolated from the resin of Boswellia have now been determined to have anti-inflammatory properties.

In a double-blind, randomized, placebo-controlled trial, 30 patients with osteoarthritis of the knee received either a Boswellia extract or placebo. After eight weeks, the supplemented patients demonstrated superior symptom relief, including a decrease in knee pain, increase in knee flexion, increased walking distance, and decreased frequency of knee swelling. The placebo patients experienced no such changes.  In animal models of both experimentally induced osteo- and rheumatoid arthritis, Boswellia extracts have been found to reduce standard arthritis scores, paw swelling, and secretion of pro-inflammatory signaling molecules called cytokines.

In another study of patients with knee osteoarthritis, a Boswellia extract enriched in AKBA was shown to produce both clinically and statistically significant improvements in pain scores and physical function scores.  Some patients experienced these results in as little as seven days after beginning supplementation.  This study is especially significant because researchers determined that Boswellia treatment did more than simply relieve symptoms.  The extracts improved conditions within the ailing joints by reducing the amounts of the joint-degrading, protein-melting enzyme matrix metalloproteinase-3.

Human studies of patients with advanced ulcerative colitis showed that six weeks of supplementation with Boswellia gum resin extract (350 mg three times daily) produced significant improvements in stool properties, microscopic appearance of the bowel wall, and blood tests of inflammation.  An impressive 82% of the supplemented patients went into remission. These results were better than the 75% remission rate experienced by control patients that were taking the standard drug sulfasalazine (1 gram three times a day).

Boswellia extracts have also induced clinical remission in patients who have collagenous colitis, a less common form of inflammatory bowel disease characterized by chronic diarrhea. Patients who followed the study protocol had a 63.6% remission rate, compared with just 26.7% of those receiving placebo.

Atherosclerosis, or hardening of the arteries, is a complex process that leads to heart attacks, strokes, and peripheral vascular disease and contributes to cognitive loss due to aging.  Research has shown that atherosclerosis, like so many other age-accelerating processes, has a major inflammatory component.  Inflammation is mediated by AKBA’s ability to shut down NF-kappaB, the master inflammation regulatory complex.  In a mouse model of atherosclerosis, treatment with AKBA inhibited NF-kappaB, and resulted in about a 50% reduction in the size of atherosclerotic plaques.

Chronic inflammation also induces changes in the function of platelets, the tiny cell fragments responsible for initiating blood clotting.  Inflammatory signals trigger platelets to become increasingly sticky, causing them to adhere to vessel walls.  This can eventually block blood flow to produce a heart attack or stroke. Boswellia extracts have now been shown to significantly inhibit platelet activation and clumping.

A component of Boswellia resin called incensole acetate inhibits NF-kappaB, and has now been shown to inhibit the gene expression of inflammatory mediators in an animal model of traumatic brain injury.  This effect also inhibits degenerative changes in the hippocampus, one of the brain’s chief memory-processing areas.  Boswellic acids have also been found to stimulate hippocampal cell growth resulting in new, highly branching projections called neurites.

Neurites are the tiny projections that brain cells use to contact other brain cells.  These cell networks give us our thoughts and memory.  This important study is disproving the outdated belief that brain tissue cannot regenerate and may give hope to those currently suffering from degenerative brain disorders that are believed to be incurable.  Even hippocampal changes related to aging which resembles a slow-motion version of acute brain injury in its cellular effects, can be improved in animals given Boswellia supplements.

Because inflammation plays a central role in promoting cancers of all kinds, inhibiting inflammation is an important cancer-prevention strategy. Research is showing that components of Boswellia, particularly the boswellic acids such as AKBA, can be very effective against cancers.  Boswellia can bring about early cell death and regression of tumors by shutting down the master inflammation regulatory complex, NF-kappaB.  In one study, AKBA, the most potent of the boswellic acids, rapidly induced cell death in cells derived from human meningioma, a common central nervous system tumor.

The Boswellia serrata plant is a moderate-to-large branching tree that grows in high, dry habitats in India, Northern Africa, and the Middle East. Its gummy resin, known as frankincense, is tapped from the tree by means of incisions in the bark. The gum contains compounds that have been used for thousands of years for their anti-inflammatory, pain relieving, arthritis-fighting, and anticancer effects.

There are many good Boswellia extracts available but for professional strength pain relief, Life Extension 5-Lox Inhibitor with Apresflex 100 Mg Vegetarian Capsules, 60 Count is an advanced Boswellia extract. Boswellia AKBA 120c  is a professional quality, high AKBA boswellia extract which has a proven and powerful ability to inhibit NF-kappaB.  (As an Amazon Associate I earn a small amount from qualifying purchases.) 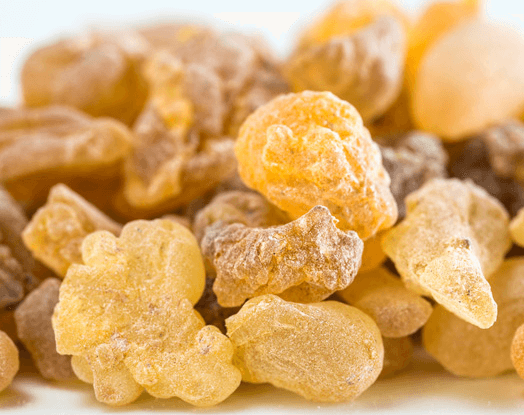 Read on for more fascinating details on boswellia!

It’s not every day that scientists discover a natural source that fights inflammation as well as NSAIDs–much less one that exceeds them.  Yet that’s exactly what scientists are discovering about Boswellia serrata.

Importantly, Boswellia extracts achieve these benefits without the damaging side effects caused by NSAIDs.  This is because Boswelllia extracts appear to have several entirely different mechanisms of action than NSAIDs.

NSAIDs prevent inflammation by inhibiting an enzyme called COX-2 (cyclooxygenase-2).  The problem is that in the process, they also block COX-1, which is needed to maintain a healthy stomach lining.  This is one of the primary causes of NSAID toxicity.

Boswellia extracts work differently than NSAIDs because they inhibit different enzymes involved in the inflammation process.  COX-2 is involved in converting arachidonic acid into an inflammatory signaling molecule known as prostaglandin E2.  In stead of inhibiting COX, Boswellic acids, most prominently one called AKBA, work by inhibiting the enzyme 5-LOX (5-lipoxygenase), thereby reducing the biosynthesis of inflammatory signaling molecules known as leukotrienes.

In addition to inhibiting 5-LOX, boswellic acids have been found to inhibit inflammation at a number of other points of action in the development of inflammation:

Thanks to Life Extension Magazine for this important article…