The Many Health Benefits
of Cayenne Pepper 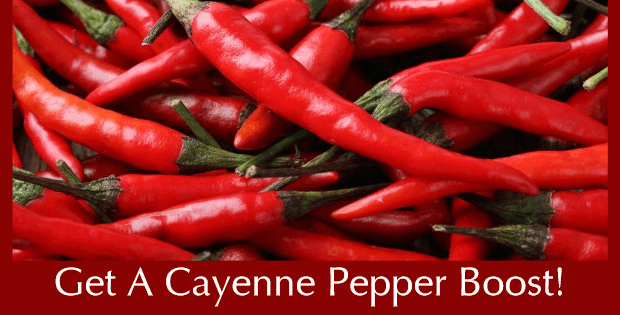 Get A Cayenne Pepper Boost

Cayenne pepper boosts the metabolism. Cayenne is a natural stimulant to the cardiovascular system, mucous membranes and digestion. A stimulant is something that increases the energy output of a system or organ.  Herbal stimulants have a broader energetic effect than the typical caffeine or amphetamine stimulants.  Those stimulants affect the nervous system and can be quite exhausting over time.  Cayenne is native to the Americas and is a member of the Capsicum genus which also includes bell peppers, chilies, paprikas and habaneros. It has been cultivated for use for at least 7,000 years.

Cayenne can help prevent or shorten the duration of a cold or flu. It warms the body and promotes sweating.  Using saunas or hot baths as well as internal medicines like cayenne are a long-celebrated way to stop a cold in its tracks. It also promotes mucous membrane secretions. Mucus is loaded with antibodies and is a powerful immune system response to an invading pathogen. Cayenne peppers will quickly drain stuffed up sinuses.  Draining mucus lessens the possibility of a secondary infection in the sinuses.

Cayenne is full of antioxidants and a diet high in antioxidants has been shown to decrease free radical damage to the arteries and support the healthy functioning of the whole cardiovascular system. Cayenne can regulate cholesterol levels, reduces platelet aggregation and encourages fibrinolytic activity. These actions help prevent blood clots which is effective in preventing heart attacks. The capsaicin in cayenne pepper helps to reduce lipid deposits in the arteries.  It also dilates arteries and blood vessels to allow any clots to pass.

For many years, chili has been hailed for its therapeutic properties, and now researchers have found that eating chili peppers regularly can cut the risk of death from heart disease and stroke.

Carried out in Italy, where chili is a common ingredient, the study compared the risk of death among 23,000 people, some of whom ate chili and some of whom didn't.

Participants' health status and eating habits were monitored over eight years, and researchers found that the risk of dying from a heart attack was 40% lower among those eating chili peppers at least four times per week.

Death from stroke was more than halved, according to results published Monday in the Journal of the American College of Cardiology.

"An interesting fact is that protection from mortality risk was independent of the type of diet people followed," said study lead author Marialaura Bonaccio, an epidemiologist at the Mediterranean Neurological Institute (Neuromed).

Capsaicin, a major constituent of cayenne peppers, reduces the amount of substance P, a chemical that carries pain messages to the brain. Cayenne is used topically to relieve many different types of pain, including shingles, migraine headaches, back aches, menstrual cramps and other aches and pains. Studies have shown that cayenne pepper relieves pain after surgery. It also alleviates pain from nerve damage in the feet or legs from diabetes (diabetic neuropathy), lower back injuries, osteoarthritis and rheumatoid arthritis, as well as fibromyalgia pain.

Cayenne is a premier herb for warming and stimulating digestion. It can be added to foods, taken as tea or a capsule (careful not to take too much!) or used in a tincture. Under-active digestion results in difficulty transforming food into nutrients. This is a common cause of fatigue as the poor digestion reduces the nutrients needed for energy.  Signs of poor digestion can include belching, sour regurgitation, nausea, foul breath, gas, lack of appetite, loose stools and heartburn, and cayenne can relieve all of them.

Cayenne and other spicy peppers were once blamed for causing ulcers, but research has shown that they are a natural treatment for ulcers. Cayenne supports the health of the lining of the stomach, promotes tissue healing by bringing blood to the area, and addresses secondary infections like the H. pylori bacterial infection that are often seen concurrently with ulcers. It also blocks substance P which transmits pain, thus relieving the pain associated with ulcers.

When taking capsules for circulation, energy, colds or flu and all the other great health benefits, starting with a milder formula and then building up to stronger ones can help avoid any initial discomfort. Solaray – Cool Cayenne, 600 mg, 180 capsules is formulated to be very gentle on the stomach. (As an Amazon Associate I earn a small amount from qualifying purchases.)

Cayenne is strong medicine and should be handled respectfully. Cayenne is very irritating to the eyes. If you have contacts or if you are preparing a lot of cayenne peppers consider wearing gloves and working in a well ventilated area. It is possible to burn your eyes even many hours after contact and after washing hands many times.

Cayenne is commonly used in pepper spray devices. In the past five years more than 60 deaths have been attributed to law enforcement use of pepper spray in the United States. Cayenne shouldn’t be taken in large amounts during pregnancy. If you are using warfarin or other blood-thinning pharmaceuticals, you should talk to your doctor before using cayenne. 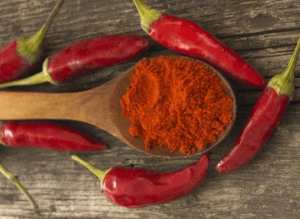 2. RELIEVES MIGRAINE PAIN  Researchers suggest that cayenne pepper, due to its spice, is able to stimulate a pain response in a different part of the body. Once this happens, the brain puts its attention on that new site and will no longer concentrate on the pain in the head, which causes the migraine. After this initial pain reaction from the cayenne pepper, the nerve fibers have a depleted substance P, or pain chemical, and the sensation of pain is lessened. You are basically tricking your body to “feel pain” somewhere else, so that the head is no longer the main focus for pain chemicals.

3. PREVENTS BLOOD CLOTS Blood clots are blockages in your arteries and blood vessels that limit blood flow through your circulatory system. Cayenne encourages fibrinolytic activity and helps prevent blood clots. This is also the reason why cayenne pepper is effective in preventing heart attacks. The capsaicin in cayenne pepper helps to clear away artery-narrowing lipid deposits, and dilates arteries and blood vessels to clear away clots.

4. PROVIDES DETOX SUPPORT  Cayenne pepper benefits include its ability to stimulate circulation and eliminate acidity. Cayenne pepper restores the circulatory system by opening the capillaries and regulating blood sugar; it also helps the digestive system that moves bacteria and toxins out of the body. Cayenne pepper also increases body temperature and boosts your metabolism.

5. RELIEVES JOINT AND NERVE PAIN  Cayenne power has very powerful pain-relieving properties when applied to the skin. It reduces the amount of substance P, a chemical that carries pain messages to the brain. When there is less substance P, the pain messages no longer reach the brain and you feel relief. Studies have found that cayenne pepper relieves pain after surgery, such as a mastectomy or an amputation. It also alleviates pain from nerve damage in the feet or legs from diabetes, lower back injuries, osteoarthritis and rheumatoid arthritis, as well as fibromyalgia symptoms like joint or muscle pain. (1)

6. SUPPORTS WEIGHT LOSS  Studies have found that consuming cayenne pepper for breakfast creates less appetite, so people eat less calories during the day. It also burns excess fat because it’s a metabolic booster. As one of the key anti-inflammatory foods, cayenne pepper benefits also include weight loss. Cayenne pepper has the power to soothe inflammation and bloating that comes from allergies, food sensitivities and infections. (2)

Thanks to Dr. Axe for this helpful list. Read on for more…