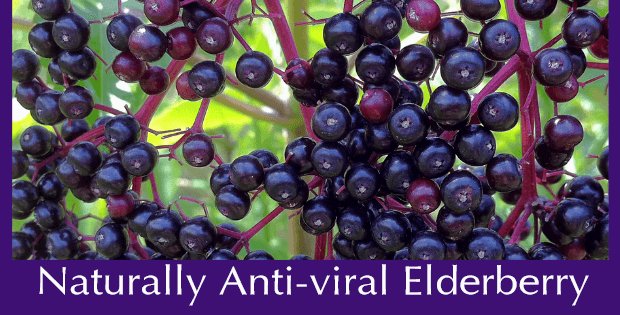 Effective Against At Least Ten
Different Strains of Influenza

Elderberry is a natural anti-viral and has been used in folk medicine for centuries to treat influenza, colds and sinusitis.   It has been shown in many studies to have antiviral activity against influenza and herpes simplex.  A 2011 study published in Bio Med Central (BMC) demonstrated that black elderberry inhibits the replication of both influenza A and B viruses, as well as three Gram-positive bacteria and one Gram-negative bacteria which cause upper respiratory infections.

The flavonoids present in elderberries are the source of their remarkable ability to control virus infections and increase immune system effectiveness. The most active ones are anthocyanins cyanidin 3-glucoside and cyanidin 3-sambubioside.   In lab studies, elderberry anthocyanins were found to bind to H1N1 swine flu virus, blocking its ability to infect host cells, exhibiting activity comparable to that of oseltamivir (Tamiflu).

Elderberry has been shown in cell culture studies to be effective against at least ten different strains of influenza.  Anthocyanins also have an anti-inflammatory effect comparable to that of aspirin, and has a pronounced effect in improving aches, pain and fever from colds and flu.

A standardized elderberry product was shown in placebo-controlled, double-blind, human studies to reduce the duration of illness from seasonal influenza to as little as 2-4 days.  The study at Hadassah University Hospital in Israel, found that elderberry anthocyanins boost the production of cytokines, which increase the body’s immune function.

The juice of elderberries has been shown to reduce excessive mucous secretion and some research has shown that elderberries can reduce the swelling of mucous membranes and improve sinus drainage. Elderberries are a rich source of vitamins A, B and C, potassium and antioxidants. Some research suggests they may be a more powerful anti-oxidant than blueberries.

European elder is a plant native to Europe, Northern Africa, and Western-and Central Asia. Its flowers and berries have a long history of use in traditional European medicine. Elder berries have also been used for making preserves, wines, winter cordials, and for adding flavor and color to other wines.  The branches and leaves are poisonous. The small stem which is sometimes left on the berry is safe.

Do not eat raw wild elderberries as they are mildly toxic unless cooked or dried and made into a tincture. The raw fruit contains a component sambungin which may cause vomiting and severe diarrhea if ingested.

A commercially prepared form is the simplest option to be sure of the correct preparation. Nature’s Way Sambucus Black Elderberry Original Syrup, 8 Ounce is an excellent elderberry syrup.  There is also one especially for children, Nature’s Way Sambucus for Kids Bio-certified Elderberry, 8-Ounce.  For the convenience of chewable tablets, Sambucol Black Elderberry Immune System Support Original Formula Chewable Tablets, 30 Count is the specific elderberry extract used in some of the studies. (As an Amazon Associate I earn a small amount from qualifying purchases.) 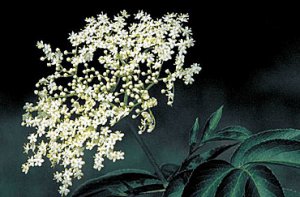 See the details of the clinical studies below!

Hadassah University researchers discovered that the berries confer protection at the cellular level by inhibiting damaging inflammation and enhancing immune system response. They also confirmed that Elderberry is a safe and effective general health tonic. In summary, the Hadassah researchers stated:“Sambucol ( a proprietary Elderberry product) might therefore be beneficial to the immune system activation and in the inflammatory process in healthy individuals or in patients with various diseases. Sambucol could also have an immunoprotective or immunostimulatory effect when administered to cancer or AIDS patients, in conjunction with chemotherapeutic or other treatments.” Dr. Madeleine Mumcuoglu, [world-renowned Israeli virologist who researched and developed Sambucol] and is president of Razei Bar [the company that manufactures Sambucol], first tested her research on patients in the Southern Israel flu epidemic of 1992/3. The results were extremely encouraging. “Within 24 hours, 20% of those patients taking Sambucol had dramatic improvements in symptoms like fever, muscle aches and pains and coughing. By the second day, 73% were improved and by day three, 90%. In the untreated group, only 16% felt better after two days. The majority of that group took almost a week to begin feeling better.” [6] A 2001 study published in the journal, European Cytokine Network, focused on how elderberries engage proinflammatory cytokines in a healthy immune system. The researchers concluded that Sambucol Elderberry products activate immune response by stimulating and enhancing inflammatory cytokines. Previous studies have demonstrated that elderberry also boosts the production of non-inflammatory infection-fighting cytokines depending on the situation and what is needed by the body, essentially acting like an adaptogen. The immunostimulatory effect of Elderberry is effective not only for influenza but may prove useful in the treatment of cancer and various immunosuppressive diseases like AIDS. According to Mountain Rose Herbs: “Extensive research shows that elder stop the production of hormone-like cytokines that direct a class of white blood cells known as neutrophils to cause inflammation, especially in influenza and arthritis. On the other hand, elder increases the production non-inflammatory infection-fighting cytokines as much as 10 fold”

Thanks to Paul Fassa at Real Farmacy for this report. For a video demonstrating how to make your own syrup and tincture, read on…