Mushrooms have always been used as food and medicine.  Mushrooms are truly magical and have long been used throughout Asia for medicinal purposes. There are at least 270 species of mushroom known to have various therapeutic properties.

In modern times, many scientific studies on medicinal mushrooms have been conducted over the past three decades, particularly in Japan, China and Korea.  These studies have confirmed the traditional uses and many new applications for medicinal mushroom are being discovered.  Ongoing research continues to prove that these mushrooms are disease-fighting powerhouses. 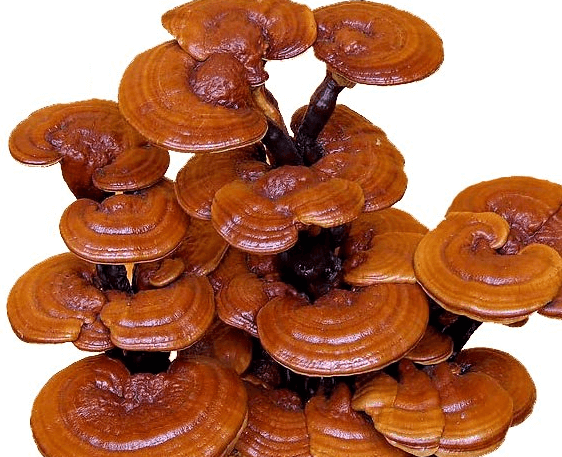 Rei Shi, Ganoderma lucidum has a hard woody texture and a shiny, varnished appearance. It primarily grows on oaks, plum trees and other hardwoods.  Ganoderma species are found worldwide, though the Chinese and Japanese species have been studied the most extensively for their therapeutic value.  This species has been used for more than two millennia in Asia. It has long been called the “Mushroom of Immortality”.  Rei Shi is well known as a tonic for supporting general wellness and vitality.

Rei Shi is famous for its immune modulating abilities, balancing immune function whether it is excessive or deficient. It helps both auto-immune conditions and allergies yet can protect the white blood cells during chemotherapy.  It stimulates the production of interferon and interleukin-1 and -2 which are our own potent anti-cancer fighters.  Rei Shi has demonstrated potent action against sarcoma, stimulates macrophages and increases levels of tumor-necrosis factor (TNF-α).  It is anti-HIV in in vitro and in vivo animal studies and protects against ionizing radiation.

Rei Shi has been approved in China and Japan for the treatment of myasthenia gravis, a serious auto-immune disease. It is also commonly prescribed for chronic bronchitis, memory loss, insomnia, high cholesterol, senility and other diseases of aging.  It lowered cholesterol levels and reduced blood and plasma viscosity in a controlled study of patients with high blood pressure and high cholesterol.

It is also famous for its excellent anti-stress effects and is used throughout Asia to calm the mind, ease tension, strengthen the nerves, and improve memory, concentration and focus.  It is believed to induce peacefulness and wisdom and is often used by spiritual seekers and meditators.  Rei Shi is seen as the supreme protector, working on physical, immune, mental and spiritual levels of our being.  A powerful adaptogenic, tonic herb, it helps us adapt to the world and builds strength of all kinds.

It is essential to use only top quality Rei Shi to experience all of its health benefits.  There are a great many low grade Ganoderma products on the market.  For a trustworthy, high quality Rei Shi preparation, you can count on Host Defense Reishi Capsules, 120 count, produced by Paul Stamets the greatest medicinal mushroom producer in America. (As an Amazon Associate I earn a small amount from qualifying purchases.) 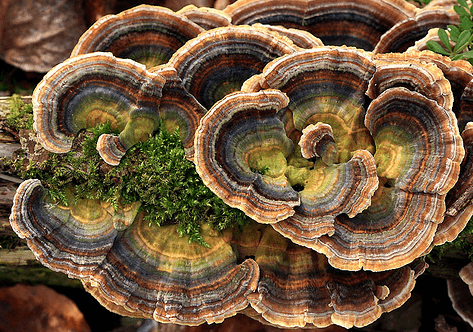 Turkey tail, Coriolus versicolor, also known as Trametes versicolor is a bracket fungi whose beautiful colors and patterns resemble the tail feathers of a turkey. It grows worldwide, and is readily found in woodlands in China and Europe and is the most commonly found polypore fungus in the oak woods of the Pacific Coast in the U.S.  Turkey Tail is a beneficial decomposer of dead wood so often forms in huge colonies on the wounds of living and dead trees.

Turkey tail is best-known for its cancer-fighting properties. It has been shown to be effective against several cancers, including cervical cancer, in combination with other therapeutic agents. One study published in ISRN Oncology in 2012, for instance, found that taking up to 9 grams of turkey tail extract per day could improve the immune status of patients with breast cancer.

It appears to enhance the effect of radiation therapy and significantly lessened the side effects of conventional medical protocols used in the treatment of cancers of the esophagus, stomach and lungs.  Another study, published in the International Journal of Molecular Medicine, discovered that turkey tail combined with reishi, Ganoderma lucidum, could induce apoptosis in leukemia cells. Turkey tail has also been shown to significantly increase the rate of remission in esophageal cancers.

Turkey tail has lowered cholesterol in animal studies and increases interferon production.  It is an anti-oxidant and scavenges superoxide and hydroxyl free radicals. And it has demonstrated anti-viral activity, possibly even inhibiting HIV infection. 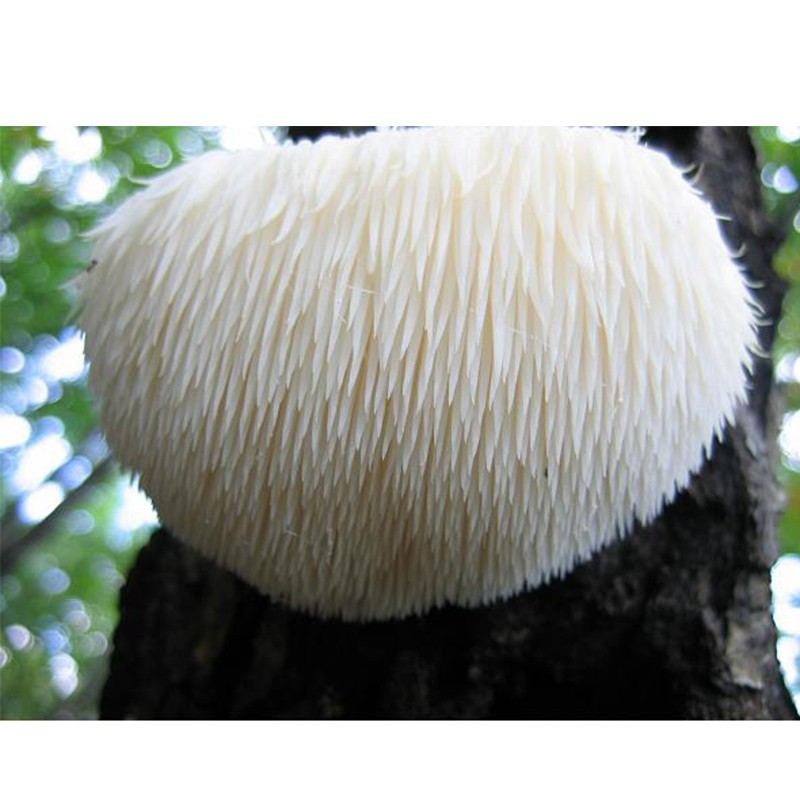 Lion's Mane For Mind and Memory

Lion's Mane, Hericium erinaceus  is an edible and medicinal mushroom that naturally grows in North America, Europe and Asia.  It has been used medicinally for centuries in many Asian countries.  Lion's Mane contains hericenones and erinacines, bioactive substances that have supportive properties for the brain and memory, and have beneficial effects on the heart and gut.

Animal studies have shown that it can help regenerate the growth of brain cells in the hipocampus, the area of the brain responsible for processing memories and emotional responses. It helps with mild depression and anxiety and can protect against memory loss.  Lion's Mane is also a powerful anti-inflammatory.

Animal studies have also found that lion’s mane may help protect against Alzheimer’s disease, a degenerative brain disease that causes progressive memory loss.  Lion’s mane mushroom and its extracts have been shown to reduce symptoms of memory loss in mice, as well as prevent neuronal damage caused by amyloid-beta plaques, which accumulate in the brain during Alzheimer’s disease

Lion’s Mane is known to block the activity of the enzyme, alpha-glucosidase, which is produced in the small intestine. Alpha-glucosidase is the enzyme that breaks down carbs for your body to then process.  This inhibition lowers the rate of glucose absorption through delayed carbohydrate digestion and extended digestion time.

Brain or spinal cord injuries can cause paralysis or loss of mental functions and can take a long time to heal.  Research has found that Lion’s Mane may help speed recovery from these types of injuries by stimulating the growth and repair of nerve cells.  It has been shown to reduce recovery time by 23–41% when given to rats with nervous system injuries.

There  have been no human studies conducted, but these results are promising.  They help to show why Lion's Mane has been used effectively in traditional medicine for centuries.

Host Defense Lion's Mane is a very high quality source of Lion's Mane from Paul Stamets. It is renowned for promoting mental clarity, focus and memory, and supports natural immunity with a full spectrum of nutrients and polysaccharides.  (As an Amazon Associate I earn a small amount from qualifying purchases.)