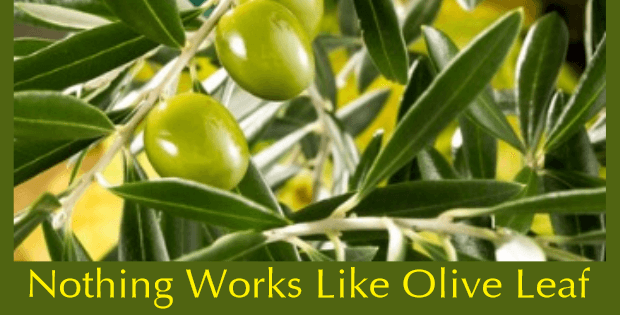 According to the Alternative Medicine Review, olive leaf extract has anti-inflammatory and antimicrobial properties, and has the ability to directly penetrate infected cells and stop viral replication. Olive leaf extract is able to interfere with critical amino acid production that is essential for viruses. It is able to control viral infection and/or spread by inactivating viruses, or by preventing virus shedding, budding or assembly at the cell membrane.   Olive leaf boosts the immune system by increasing phagocytosis, an immune system response in which cells ingest harmful microorganisms and foreign matter.

The Mediterranean olive tree, Olea europaea, actually defends itself against harmful organisms such as bacteria, fungi, parasites and insects through the eutrophic compounds it produces.  Olive leaf extract has been used as an herbal remedy for 150 years. The active compound in the olive leaf is oleuropein, a phenolic glucoside (structurally classified as an iridoid). The olive leaf also contains bioflavonoids such as rutin, luteolin, and hesperidin.  The bioflavinoids work together with oleuropein to enhance its natural activity.  Olive leaf boosts the immune system, increases energy, promotes healthy blood pressure and much more.

In vitro studies have found olive leaf extract is effective against over 50 common disease causing organisms including viruses, bacteria, fungi and protozoa such as herpes, influenza A, Polio 1, 2, and 3, Salmonella typhimurium, Candida Krusei and Coxsackie A21.

Biochemist Arnold Takemoto, in the Townsend Newsletter for Doctors and Patients, said “[I have] yet to discover another herbal substance that accomplishes anti-microbially what this substance achieves.”  A study done in 2003 proved that olive leaf extract is antibiotic against bacteria and fungi. The olive leaf extract killed almost all bacteria tested, including dermatophytes which cause infections on the skin, hair and nails, candida albicans and Escherichia coli, bacteria found in the lower intestine.

Amoebi, cryptosporidia, giardia, pinworm, tapeworm, ringworm, malaria protozoa and roundworm are some of the many parasites which olive leaf extract kills.  When used at higher dosages, olive leaf extract can expel worms from the intestines and is helpful for those with harmful organisms in the gut.

A study was conducted with identical twins with borderline hypertension (blood pressure in the range of 120-139 mmHg over 80-89 mmHg). Studies of identical twins nearly eliminate genetic variations which may impact study results. After 8 weeks, those receiving a placebo showed no change at all in blood pressure from the baseline levels.  Patients that were supplemented with 1,000 mg/day of olive leaf extract dropped their blood pressures by an average of 11 mmHg systolic and 4 mmHg diastolic. The supplemented patients also experienced significant reductions in LDL cholesterol.

Another human study measured olive leaf extract against captopril, a conventional drug used for treating hypertension. Patients with stage-1 hypertension (140-159 mmHg over 90-99 mmHg) took either 500 mg. of olive leaf extract twice daily, or 12.5 mg of captopril twice daily, which was increased as needed to 25 mg twice daily. After 8 weeks, both groups experienced a drop in blood pressure from baseline levels (11.5 and 13.7 mmHg systolic; 4.8 and 6.4 mmHg diastolic, respectively). There was no significant difference between the two groups, the olive leaf extract performed as well as the prescription drug. 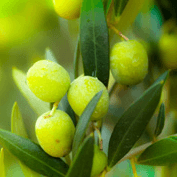 Superior To Drugs For Diabetes

In animal and basic lab studies, olive leaf extracts and oleuropein have been found to lower blood sugar by slowing the digestion of starches into simple sugars, and slowing absorption of those sugars from the intestine. It also lowers blood sugar by increasing uptake of glucose from the blood into the tissues.  Olive leaf protects tissues from the free radical damage caused when glucose binds to proteins in the process called glycation, and also increases the levels of other natural antioxidant systems in the body, broadening the degree of protection.

Studies show that diabetic animals supplemented with olive leaf extracts experience significant reductions in blood sugar and cholesterol. In a dramatic head-to-head study, diabetic rats were treated with either olive leaf extract or glyburide (Diabeta®), a common glucose-lowering drug. By the end of the study, the anti-diabetic effects of olive leaf extract proved superior to those of the drug.

Stops Cancer Before It Starts

Studies show that oleuropein is an powerful antioxidant that inhibits cancer formation at its earliest stages. Olive leaf extracts inhibit DNA damage from free radicals, the very first step in the development of cancer cells. Once cells become cancerous, they rely on a host of chemical signaling factors that promote their growth and organization into tumors. Olive leaf compounds inhibit tumor growth factors and disrupt signalling pathways.  Oleuropein also suppresses an enzyme that cancer cells rely on to derive and store energy from starches and sugars.

Oleuropein and olive leaf extracts also prevent inflammation, another major promoter of tumor growth. In breast cancer cells specifically, oleuropein reduces malignant cells’ ability to respond to estrogen, the female hormone that many breast cancer cells depend on for their survival.  Oleuropein inhibits the production of the “protein-melting” enzymes that cancer cells need in order to invade healthy tissues and spread to distant parts of the body.

In one study, mice bred for a high spontaneous cancer rate were supplemented with oleuropein. The tumors completely regressed and disappeared in 9 to 12 days. When the tumors were examined before they vanished, they were found to have a disordered, crumbly consistency, and no cancer cells remained alive.

Olive extracts help protect the brain and central nervous system from the destruction brought on by strokes and age-related degenerative conditions such as Alzheimer’s and Parkinson’s diseases.50 They accomplish this by suppressing inflammation and reducing the damage done by oxidative stress. In acute brain injuries such as those caused by a stroke or trauma, damaging processes such as oxidative stress occur within minutes of the original event—and, ironically, are worsened by the return of normal blood flow to the area.50,51 Researchers found a number of positive effects in animals that were pre-treated with olive leaf extract and then induced with a stroke. Compared with untreated animals, the treated animals experienced a sharp reduction in markers of oxidation and an increase in normal cellular antioxidant systems.52,53 Microscopic examination of brain tissue revealed a similar decline in injury to brain cells and up to a 55% decrease in the volume of dying brain tissue.50 Similar results are shown in experimental spinal cord injury in animals pretreated with oleuropein.53 Olive leaf extracts offer similar protection for neurodegenerative diseases. Oxidative stress occurs more gradually in neurodegenerative diseases. However, the effects add up over a lifetime, producing inflammation and other changes that result in the accumulation of abnormal proteins that interfere with brain function and kill neurons. Olive leaf extracts help prevent these abnormal proteins from assembling into the neurofibrillary tangles seen in the brains of people with Alzheimer’s and similar diseases.54-56

Olive leaves and their extracts have long been used in the Mediterranean as folk remedies for arthritis. Now, scientific evidence has proven that olive leaf extracts can in fact interfere with the development of several different kinds of arthritis, including gout, rheumatoid arthritis, and osteoarthritis.

Gout is caused by the accumulation of uric acid crystals in joints, the byproducts of impaired recycling of DNA and RNA in cells. In a mechanism identical to that of allopurinol (the gold standard drug therapy for gout), oleuropein prevents the buildup of uric acid by inhibiting xanthine oxidase, the enzyme responsible for converting DNA and RNA into uric acid.57

Oleuropein has also been found to help prevent and treat symptoms of rheumatoid arthritis. When administered at the earliest sign of arthritis in animal models, oleuropein prevented symptoms from developing and also produced marked improvement in the microscopic appearance of joint tissue from affected animals. When administered after arthritis was fully developed, there was significant improvement in inflammatory changes to joints, compared with untreated animals.58

Thanks to Julian Everson at Life Extension Magazine for this important report.