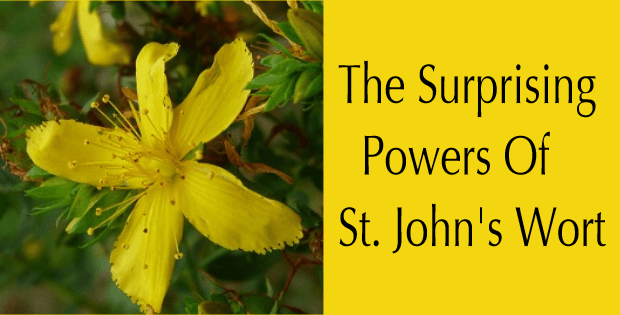 As Effective As Anti-Depressant Drugs

St. John’s Wort has become deeply associated with the treatment of depression as it is one of the best mood-lifting, anti-stress, and anti-depressant herbs.  There has been regular publication of research demonstrating its effectiveness for years and years. In clinical trials about 67% of patients with mild to moderate depression improved when taking this plant.  St John’s Wort outsells Prozac 20-to-1 in Germany.

It has been a common practice among researchers and therapists to attribute the herb’s anti-depressant and anti-anxiety effects to the naturally-present compound hypericin.  However, St. John’s Wort is a highly complex herb with many different active compounds, including: naphthodianthrones, xanthones, flavonoids, phloroglucinols (hyperforin) and hypericin.

Many studies have shown it to be as effective as anti-depressant drugs including tricyclic anti-depressants and SSRI anti-depressants. It is certainly safer than any chemical medication and does not result in dependency.  Studies have also verified its effectiveness for anxiety and stress.  It is helpful for stress eating and other stress based emotional problems.

Deeply Healing to Mind and Body

St. John’s Wort has many other health benefits that are much less commonly known. Modern research has also shown it to be highly effective for wound healing.  St. John’s Wort flowers have traditionally been macerated into oil to make a natural dressing for wounds. And research examining this application found it to be highly effective in the treatment and healing of wounds.

It can kill cancers such as melanoma.  It can even help chronic pain such as diabetic neuropathy and migraine headaches better than many pain killing drugs.  Exciting research in the online journal PLoS One found that hypericin found in St. John’s Wort was highly effective against melanoma, using three different mechanisms to cause cancer cells to die.

It has been shown to reduce the hot flashes of menopause.  Research published in the medical journal Menopause found that St. John’s Wort significantly reduced the frequency and severity of hot flashes in menopausal, perimenopausal, and post-menopausal women. (Perimenopause is considered the ten years prior to menopause. Post-menopause begins one year after periods have altogether stopped.)

A study in the medical journal Brain Pathology, found that St. John’s Wort has a protective effect against the beta-amyloid plaques linked with Alzheimer’s disease.  Research has shown it as a promising therapy for Parkinson’s disease.

St. John’s Wort is a powerful anti-oxidant and this certainly contributes to its many health benefits.  Free radical damage to the tissues is a major contributor to aging and disease.  It is the whole herb rather than single components such as hypericin that have shown these remarkable benefits in study after study. 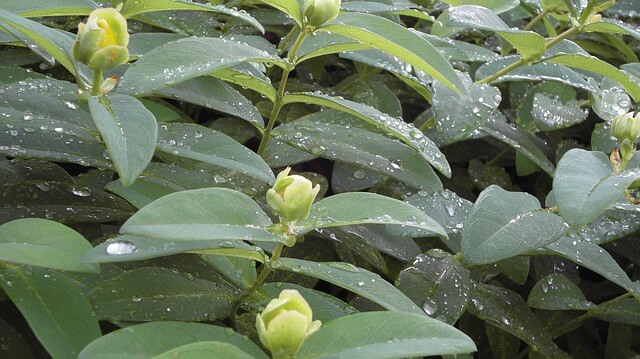 The use of St. John’s Wort (Hypericum perforatum) dates back thousands of years.  Legend has it that it’s name came from early Christians who named it after John the Baptist as it blooms right about June 24th which is celebrated as his birthday.  It’s bright yellow flowers have five petals in a circle that resembles a halo.  The date is also very close to the longest day of the year.  Historical uses from as far back as 400 B.C. show the Greeks and Romans using it for a wide range of conditions.

St. John’s Wort isn’t particular about the soil type and grows well in sand, clay, rocky soil or loam, and tolerates acidic to slightly alkaline pH.  It adapts to both moist and dry soil, and even tolerates occasional flooding.  Growing St. John’s wort herb in a location with too much sun can lead to leaf scorch, while too much shade reduces the number of flowers. The best location is one with bright morning sunlight and a little shade in the hottest part of the afternoon.  Give the area some compost when planting and it will easily thrive as a short shrub.  It will self seed so keep an eye on it if you don’t want it to become a ground cover.

As with any herbal medicine, you want to be sure you are using a high quality product with the real herb in it. Gaia Herbs St. John’s Wort Liquid Phyto-Capsules, 60 Count is a professional quality preparation.   (As an Amazon Associate I earn a small amount from qualifying purchases.)