Enhance Your Calmness and Clarity

Increasing the level of brain GABA activity is the main action of prescription anti-anxiety drugs.  GABA is a calming neurotransmitter that reduces over-active and excessive mental activity.  The result of a rise in GABA levels is a reduction in anxiety and improved sleep.

Lemon balm and the rosmarinic acid it contains, also boost brain levels of GABA by inhibiting the enzyme that normally breaks down GABA.  The many types of benzodiazapene tranquilizers can lead to addiction and side effects, herbal tranquilizers like lemon balm give similar results along with numerous health effects.

Lemon balm contains rosmarinic acid, quercetin, gallic acid, quercitrin, and rutin which are all potent antioxidants that protect brain cells and other tissues from damage by free radicals.   Lemon balm tea is even used to protect x-ray technicians from the oxidizing effects of chronic exposure to low-level radiation.

The antioxidant protection provided by lemon balm shows promise in reducing oxidant-related brain cell death, an important contributor to Alzheimer’s and Parkinson’s diseases as well as age-related cognitive decline. Lemon balm and its components are also highly effective at reducing accumulations of the harmful amyloid-beta, a protein that is a leading contributor to Alzheimer’s disease.

Lemon balm and its components are credited with improving cognitive performance in maze experiments with animals.  In a human study, supplemented patients aged 65-80 years with mild to moderate Alzheimer’s, had greater improvement on tests of cognitive function than did placebo recipients. That study also found a reduction in agitation in supplemented patients compared with placebo recipients.

The German Standard License for lemon balm tea approves it for nervous disorders of sleep and of the gastrointestinal tract, and to stimulate the appetite (Wichtl and Bisset, 1994).  ESCOP (European Scientific Cooperative On Phytotherapy) lists its internal use for tenseness, restlessness, irritability, and symptomatic treatment of digestive disorders, such as minor spasms and externally, for herpes labialis (ESCOP, 1997).

Recent evidence suggests that lemon balm has a depressant or sedative action on the central nervous systems of laboratory mice.  Mice conditioned to experience chronic fear showed a significantly reduced stress response and more appropriate behavior following dosing with rosmarinic acid.  This effect has substantial implications for humans living with chronic anxiety and stress.   Lemon balm extracts also reduce pain from a variety of causes which contributes to its soothing, stress-relieving effects.

Human studies of lemon balm are just as exciting.  A series of trials conducted with a group of healthy adults by the Human Cognitive Neuroscience Unit at the University of Northumbria in the United Kingdom, found that 600 mg of lemon balm produced sustained improvements in a test of “accuracy of attention”.

Lowering the dose to 300 mg of lemon balm produced an increase in self-rated calmness.  The highest dose of 900 mg of lemon balm reduced self-rated alertness. That is a desirable effect in a supplement meant to produce relaxation.  A subsequent study using higher doses of a single 1,600 mg dose, demonstrated significant improvements in both calmness and memory performance.

The British researchers next evaluated lemon balm in a setting in which subjects are deliberately stressed in the laboratory. They gave 18 healthy volunteers doses of 300 or 600 mg of lemon balm, or a placebo, then subjected them to the Defined Intensity Stressor Simulation.  This is a battery of challenges designed to impose stress.

The 600 mg dose counteracted the negative mood effects of the stress test, while significantly increasing self-ratings of calmness and again reducing self-ratings of alertness. Similar results were later shown with a supplement containing both lemon balm and valerian root, another natural sedative.

The 300 mg dose of lemon balm also increases the speed of mathematical processing with no reduction in accuracy in human studies. That observation along with its effects on acetylcholine levels has led scientists to examine lemon balm’s effects in Alzheimer’s disease and other conditions of cognitive impairment.

Lemon balm (Melissa officinalis) is another member of the amazing, healing Mint family of plants. The green leaves of lemon balm have the scent of lemon with a hint of mint, with leaves that look like over sized mint.  It is easily grown during warmer seasons and is a great way to always have a lemon flavored and scented herb on hand for recipes, teas, bouquets, and more.

To experience the proven benefits of lemon balm be sure to use a top quality, professional strength extract.  New Chapter Lemon Balm Force, 30 Softgels uses only chemical solvent-free methods, including supercritical CO2 extraction which delivers the full spectrum of beneficial compounds found in lemon balm.  (As an Amazon Associate I earn a small amount from qualifying purchases.) 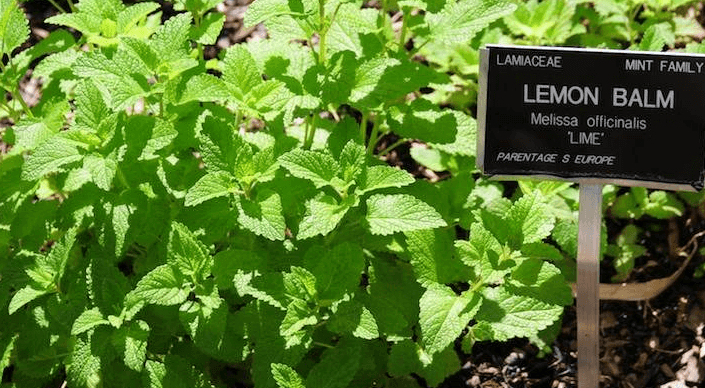 See more of lemon balm’s many health benefits below!

Lemon balm is widely used to treat anxiety and insomnia in Europe. It reduces anxiety and stress and eases sleep disorders. Recently it produced an unexpected result in a research study: it greatly increased the ability to concentrate and perform word and picture tasks.

Research has shown that the plant contains polyphenols, it can help significantly in the treatment of cold sores and combat the herpes simplex virus, shingles as well as other viral afflictions. Studies have shown a significant reduction in the duration and severity of herpes. Researchers also noted a “tremendous reduction” in the frequency of recurrence.

When applied to cold sores or genital sores caused by the herpes simplex virus, creams or ointments containing lemon balm have speeded healing. The infections did not spread as much and individuals using topical lemon balm also reported more relief from symptoms such as itching and redness. At least part of this effect is due to antiviral properties of caffeic acid and rosmarinic acid, which are contained in lemon balm.

In one study on 115 patients, a proprietary preparation of lemon balm extract in a lip balm showed efficacy in treating lip sores associated with the herpes simplex virus (WÃ¶bling and Leonhardt, 1994).

Lemon balm is approved for “nervous sleeping disorders” and “functional gastrointestinal complaints” by Commission E of the German Federal Institute for Drugs and Medical Devices. Commission E is the German governmental agency that evaluates the safety and effectiveness of herbal products. The United States does not have a comparable agency to evaluate herbal products.

Lemon balm is used in Europe for treating thyroid problems and has shown an ability to regulate thyroid hormone production. This ability, along with the herbs anti-viral characteristics have made the herb useful in the treatment of Chronic Fatigue Syndrome.

Thanks to Herb Wisdom for this great report…